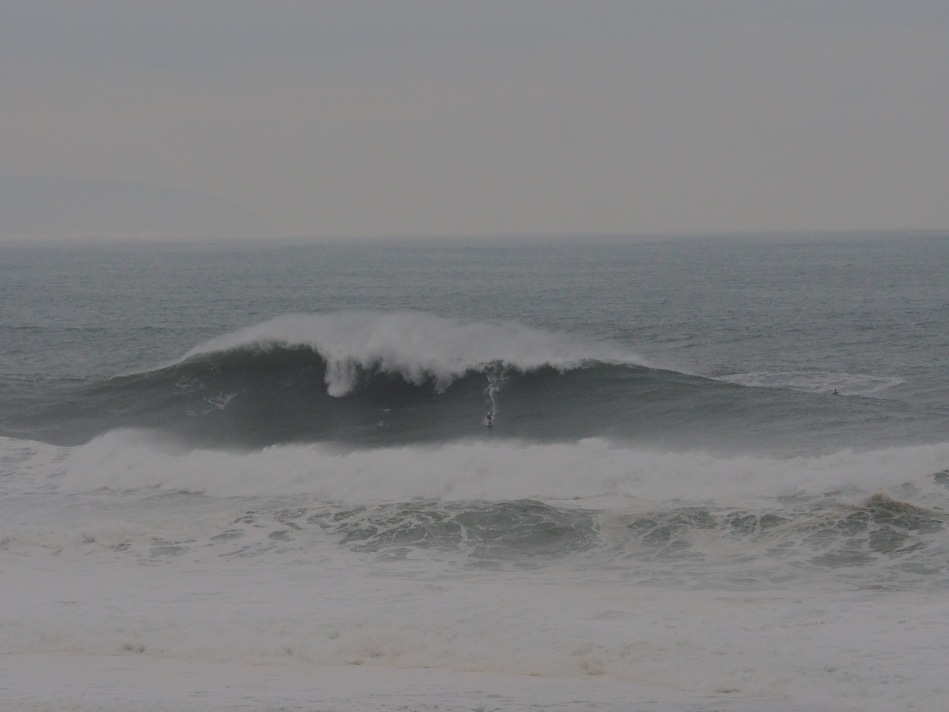 On a Sunday afternoon, the cars stream into town, queueing up and circling to find parking. Some loop twice or more, others circle once then, unsuccessful, search for a spot further away on some back road or in a neighborhood. A light mist hangs in the air, reflecting the sun, as though it were excitement, softening the rough edges of buildings and cliff sides. There’s a festival-like feel to the town. Music plays, vendors in local knit clothes sell their wares, the smell of food trucks wafts into the mist and happy dogs roam the streets freely. The strong wind howls and races up the hill blowing hair and hats out of place. The crowd pushes down the hill, towards the lighthouse overlooking the beach, to see. To see… the waves. Massive waves, too large to fully comprehend without the scale of a surfer or boat against them, born from the depths of the invisible canyon below the surface just off shore and pushed by the wind. The churn from their grandness depositing gallons of foam in the froth and along the beach. This, is Nazaré.

Portugal has lots of great surf and, thus, surfing. From Lagos and Sagres in the Algarve to Guincho and Cresmina beaches near Sintra and many others along the way, but none are as famous for the size of their waves as Nazaré. We first heard of Nazaré (not being surfers, aside from the time I got up for about 10 seconds, and I’m being generous, at Waikiki) from Tentacles (ten-tock-lesh) a cartoon octopus at the Museu do Mar in Cascais where we sat and watched the video two or more times, trying to learn Portuguese.

We have visited Nazaré twice. First, on a grey day in early January two years ago when they were prepping for competition and we watched jet skis tug surfers out into the waves and, more recently, last weekend. The offshore canyon is 140 miles long and reaches depths of 16,000 feet which enables waves traveling “at a much greater speed due to the geological fault, arriving at the coast with virtually no dissipation of energy.” (Source). As such, Nazaré is a destination for professional surfers, celebrities and locals alike to catch or watch the catching of or generation of the aforementioned waves.

The town itself, with its narrow avenues, sits along a brilliant, flat beach dotted with beachside shops and cafes. A funicular connects the main town to the peninsular hillside area called Sítio from which you can view the largest waves headed towards the lighthouse and the Praia do Norte (North Beach). And if you spot a woman wearing a bulky multi layered skirt, she’s not homeless, she’s wearing the traditional multi layered petticoat skirt of the Nazaré women. Local legend has it that these skirts have seven layers, one for each day of the week or color of the rainbow. They are also practical, as the wives of the fishermen would, historically, await the return of their husbands, seaside, in these skirts which protected them from the wind and cold. (Source: Rick Steve‘s).

To catch a view of the waves, navigate to or follow signs for the lighthouse (farol) or Praia do Norte. For the biggest waves, visit in November through March.