We touch down in Lisbon really ready for some time off from the day to day. Immediately, we notice how friendly the people are. We’ve packed our phrase book but hardly need it as most everyone speaks near fluent English and no-one seems to resent that you don’t speak Portuguese (at least they pretend that they don’t) though a well placed Obrigo (or Obrigada, if you’re a lady, this translates to I thank you, which is why gender matters) is appreciated.

We are staying in Alfama which is a neighborhood of the old, original city. It’s full of narrow winding streets with markets, shops, restaurants, bars and homes tucked into nooks and corners. The cobblestones that line the streets are uneven but also smooth and slippery and dangerous, if wet or you’re not wearing proper footware (these cobblestones and tiles are throughout the city also, not just in Alfama). There are some life saving stairways (and also some treacherous ones about as well) to take the edge off of some of the really steep inclines. 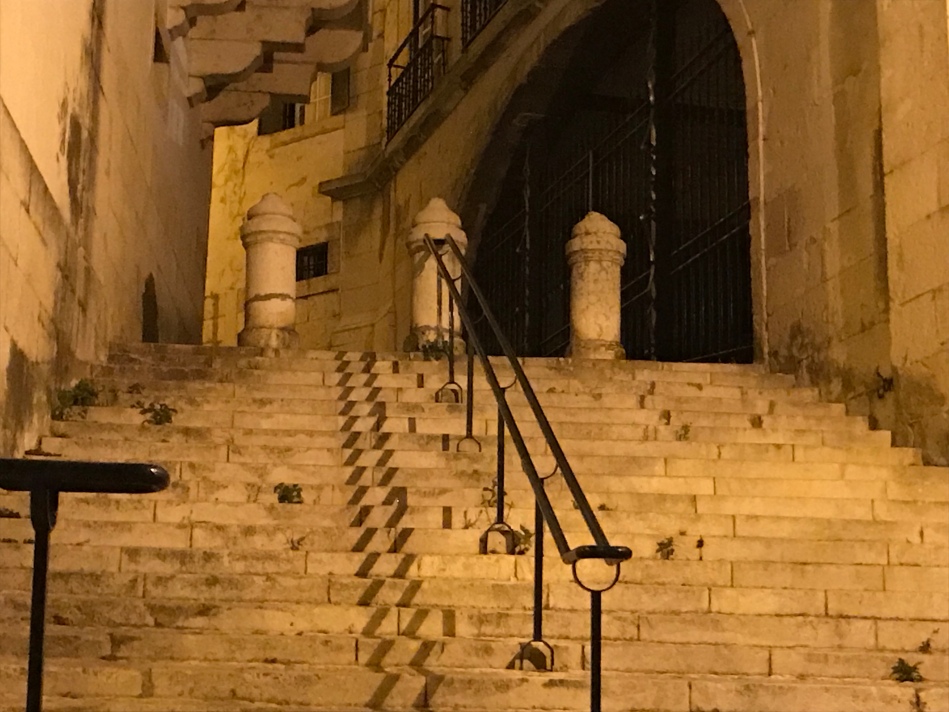 At night, we notice the second thing we love about Lisbon: the music. Born in Alfama, Fado “is a form of music characterized by mournful tunes and lyrics, often about the sea or the life of the poor, and infused with a sentiment of resignation, fatefulness and melancholia.” (source: Wikipedia, Fado). It seems everyone here can sing, and sing well. The Fado music pours out of bars and restaurants of Alfama, spilling across the cobblestones and rising up into the night air. We were lucky enough to have an Airbnb directly across from such a place with really talented singers and ended each night with a stop in for a listen. There’s also other music too. From our balcony, we listened to wedding music on a Saturday and a reggae-ish (but better) steel drummed African group reverberate down to our balcony from Miradouro das Portas do Sol plaza each night.

On our first full day, we toured the Fado museum at the foot of Alfama. It’s free and we arrived early enough to beat whatever crowd was to follow and had the place to ourselves. You can browse Portuguese guitars (below), posters, memorabilia and tidbits about Fado history all while listening to the music through the handheld headset. Definitely worth a stop if you love this music. 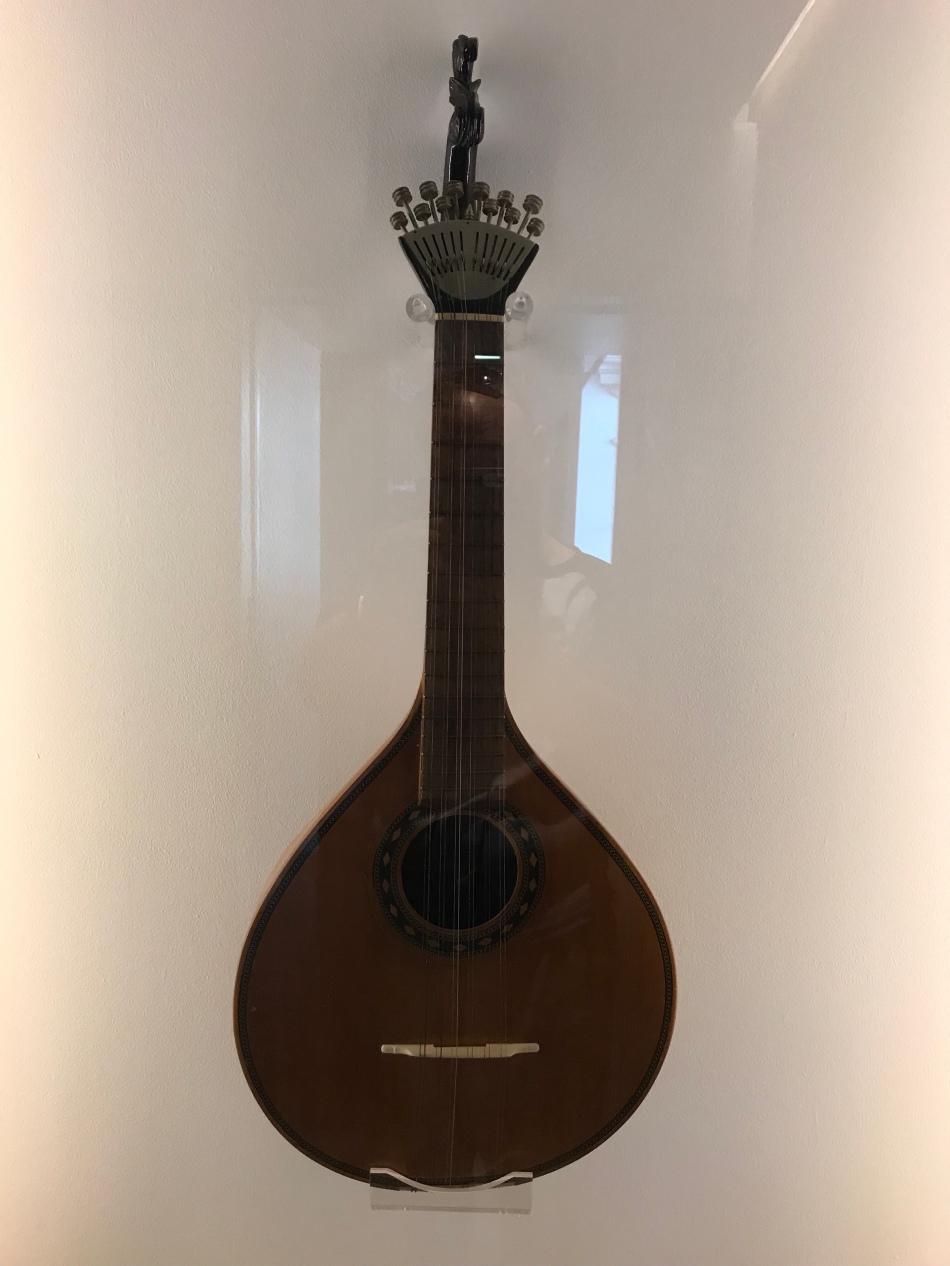 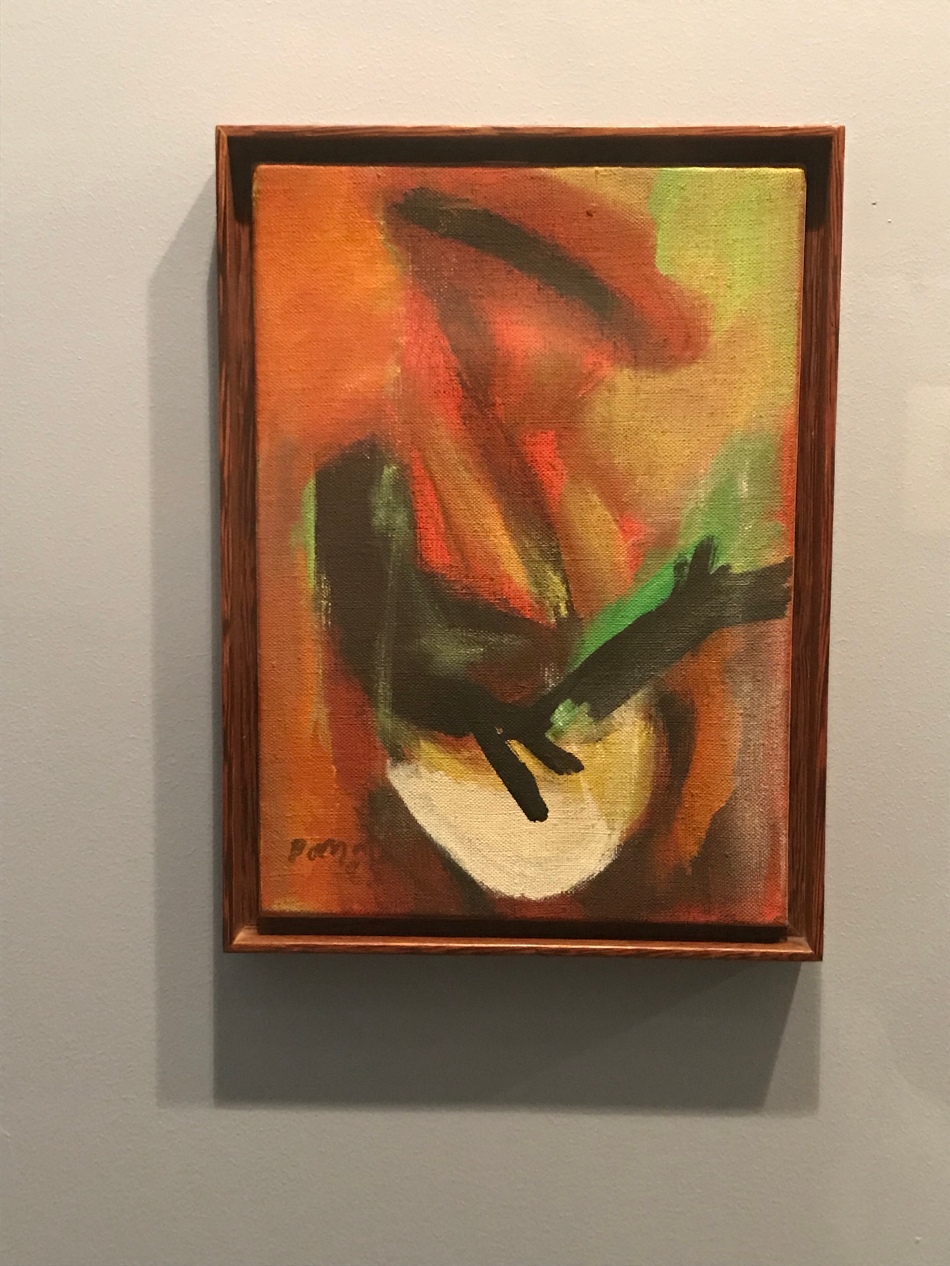 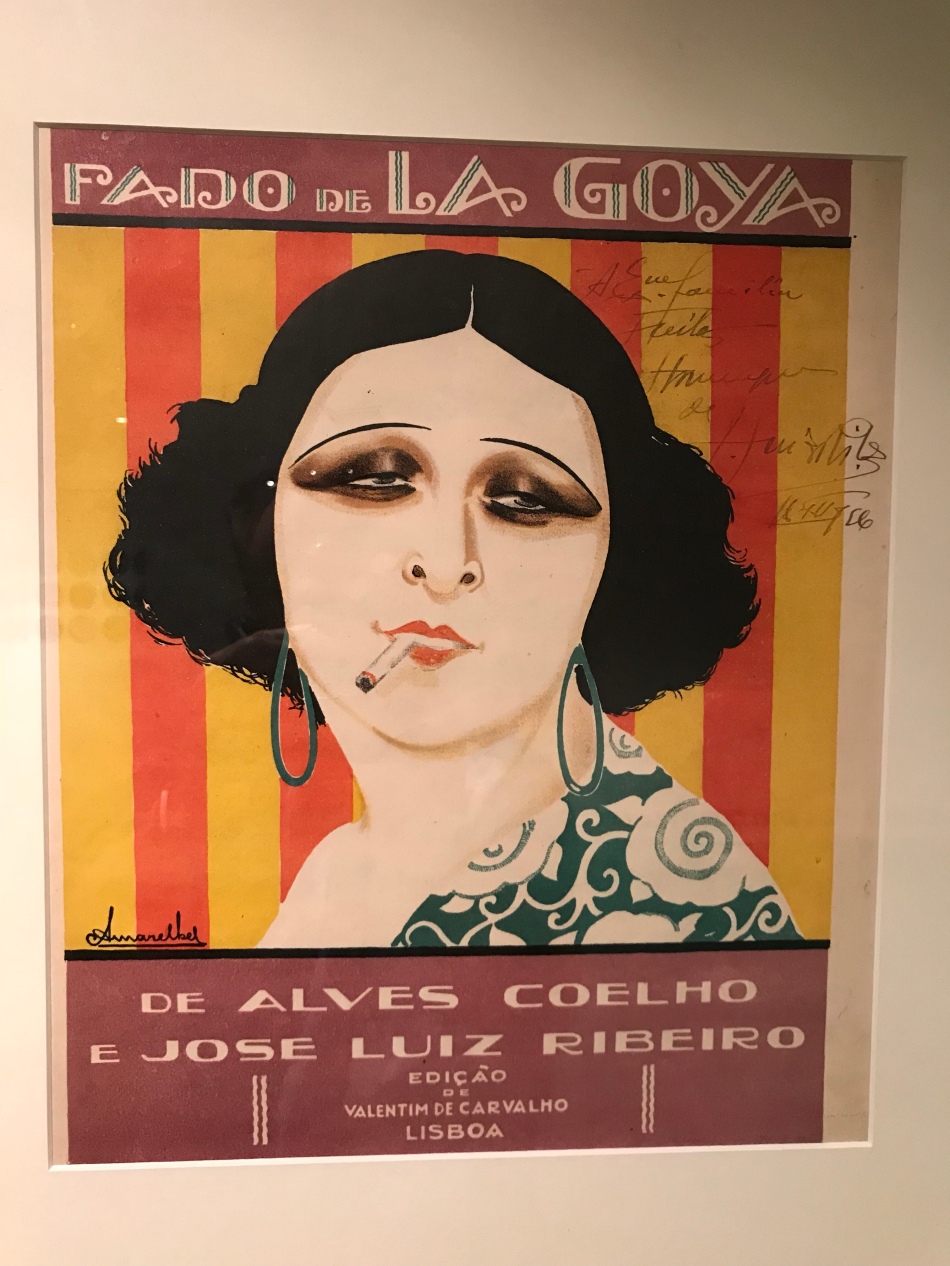 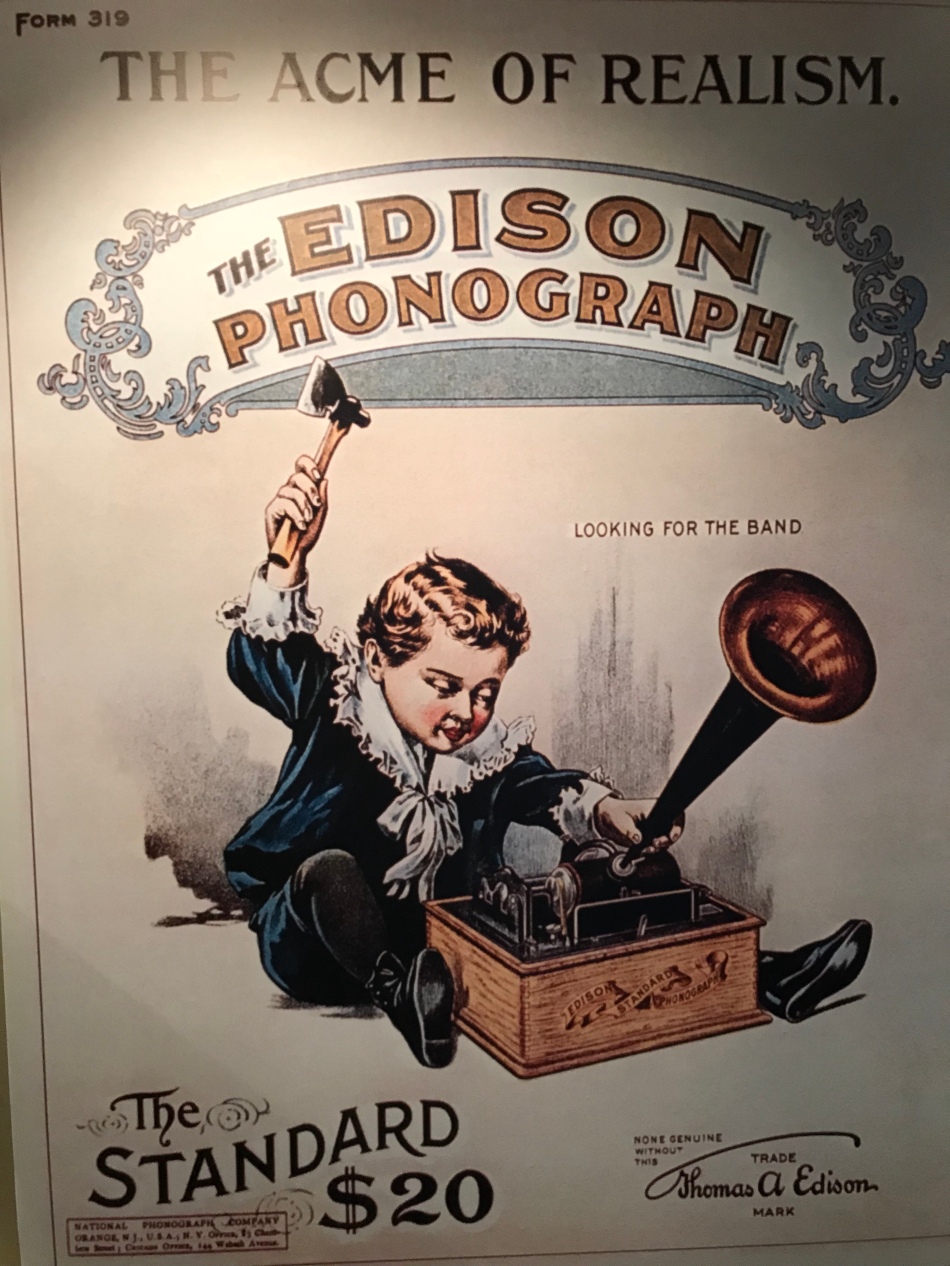 Our second stop was the Lisbon Story Centre. This museum carries you through the history of the City from its founding by the Phoenecians (note that one, Jeopardy lovers), the settlement of the Romans (check out the remnants on one of the walls and a vat used to make a traditional Roman fish sauce at the Casa dos Bicos in the free admission section downstairs), the Moors (whose architecture of a former mosque is still partially visible, though like in most once Moorish cities we’ve visited it’s mostly buried, under the Se, the Lisbon cathedral) and the Crusaders. The Story Centre audio talks you through Portugal’s dominance in exploration and trade and climaxes with a movie about the devastating 1755 earthquake and tsunami which destroyed much of the City. It then talks of the rebuilding effort which designed the present day Baixa area of Lisbon. It’s kid friendly, which is to say that the retelling of the story is designed for kids, but it does give a good understanding of the City’s establishment and its worth checking out so you can appreciate some of the ruins from the earthquake (Convento do Carmo). It’s located on Placa Do Comércio down by the banks of the Tagus at the foot of Baixa.

We spent the remainder of our days wandering around the winding streets in Alfama, Graca and Mouraria, the wider lanes in Baixa, the hills of Barrio Alto and Chiado and checking out placas (plazas), churches (the Se, the Ruins of the Convento do Carmo, and the Sao Castelo Castle (go early or late, and before or after the cruise ships come or go, a great place to overlook the City or to view the sunset) and the Monastery of Sao Vincente da Fora. We also really liked the Pantheon, a memorial to famous Portuguese citizens and also a great spot for views from the roof.

Our favorite sites were:

1. The Convento do Carmo: if you’re not afraid of hills, skip the admission fee and line at the elevator and walk around the other side to check out the skeletal remains of the convent, destroyed by the 1755 earthquake (and even some real mummified skeletons inside the archeological museum now housed inside the former convent). 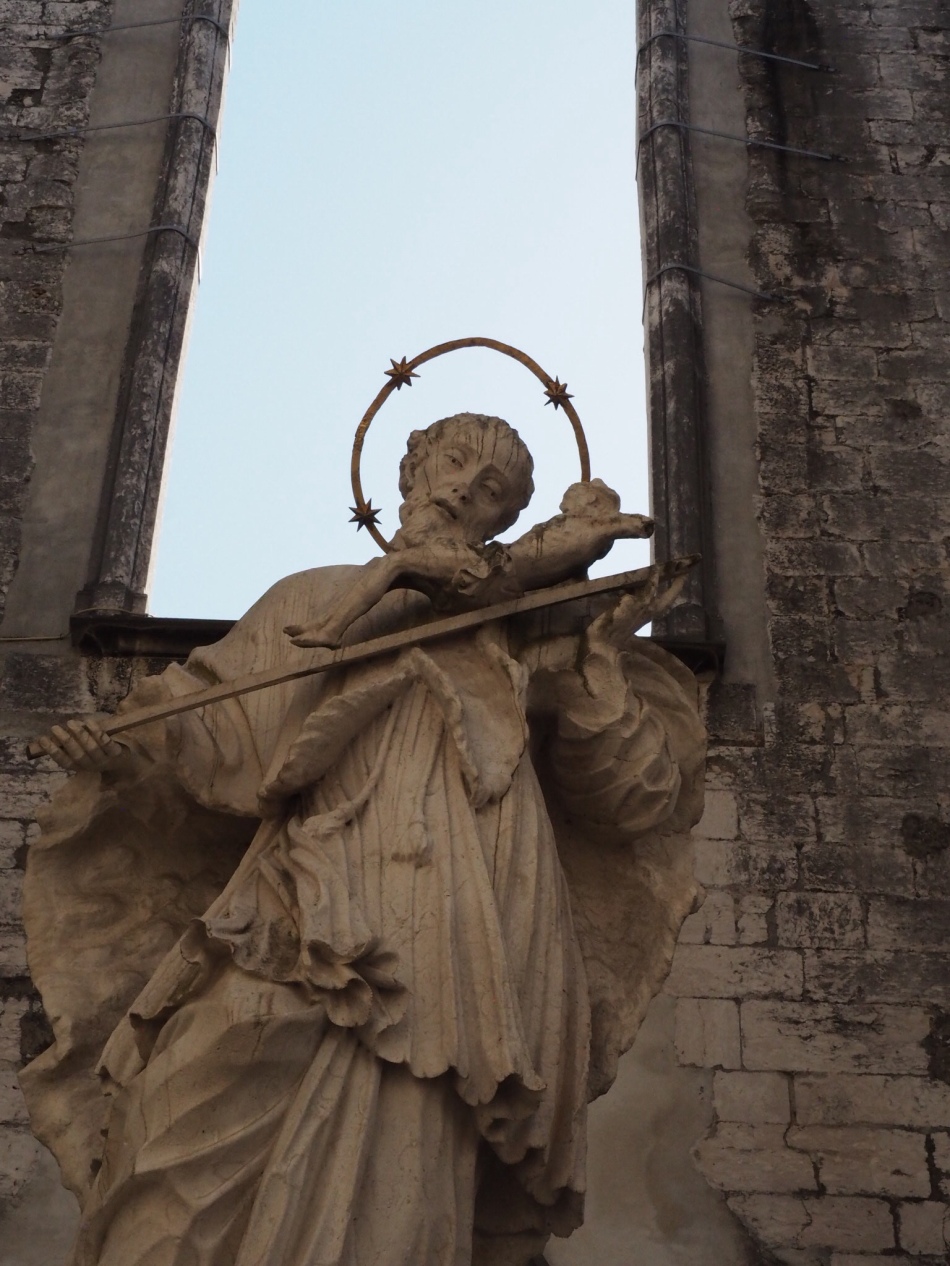 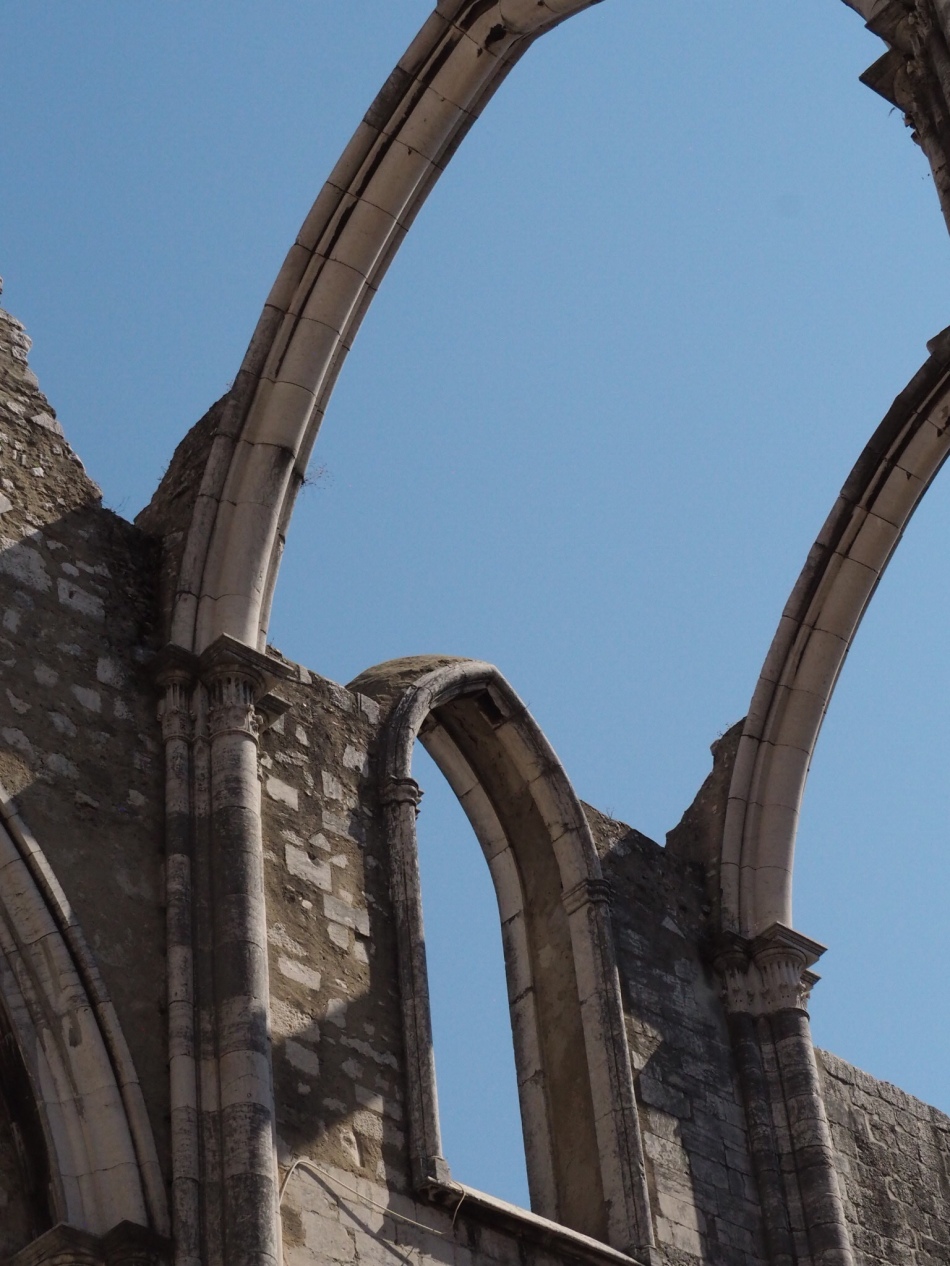 2. The stained glass and music in the Se (cathedral of Lisbon). It was Sunday morning just before a service (we think) and we got to hear a small choir practicing. 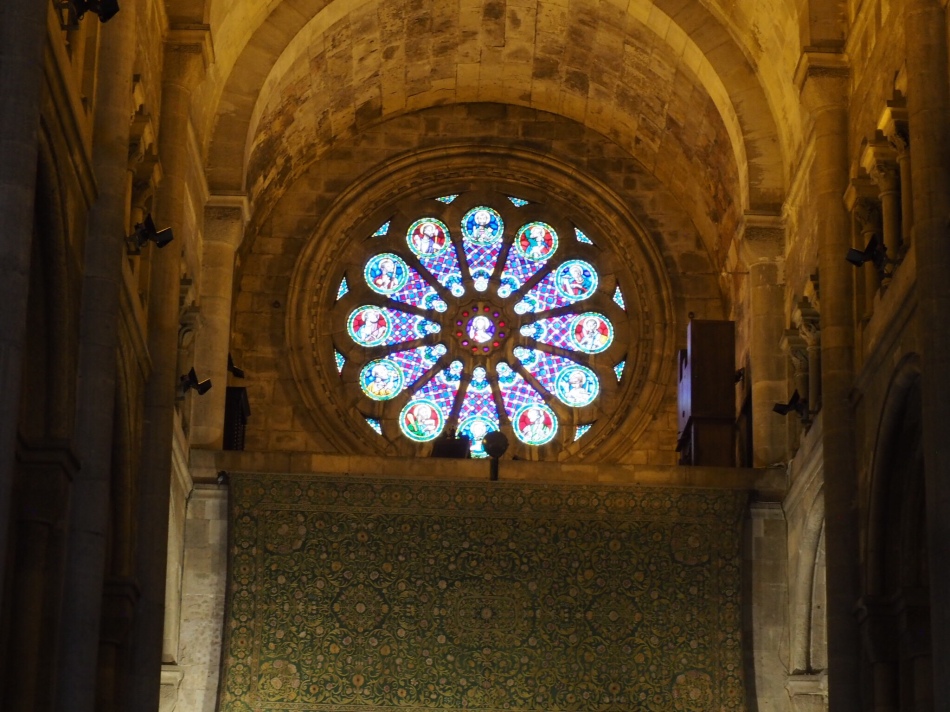 3. The Placa Rossio with its trippy black and white wavy pavement. 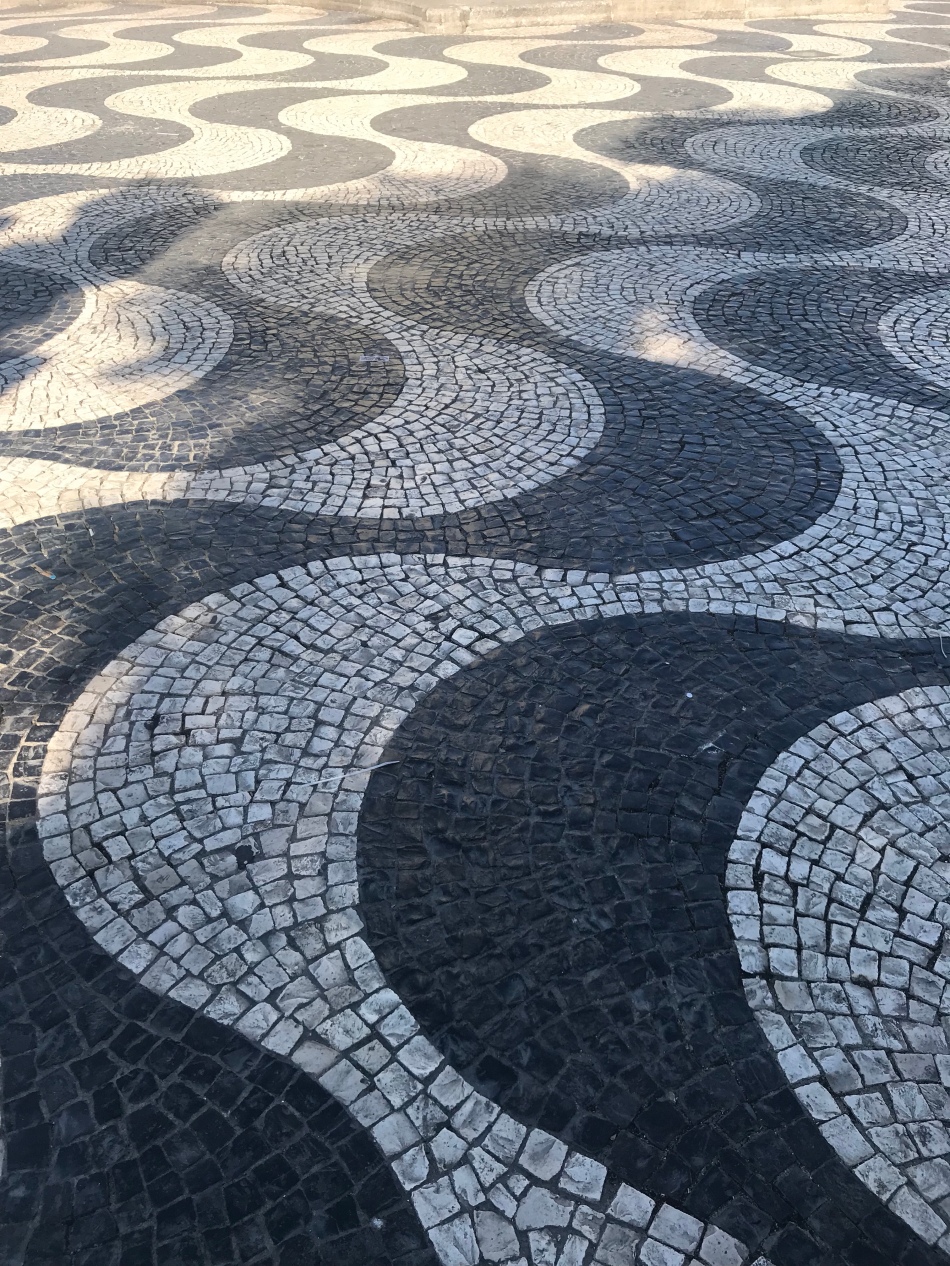 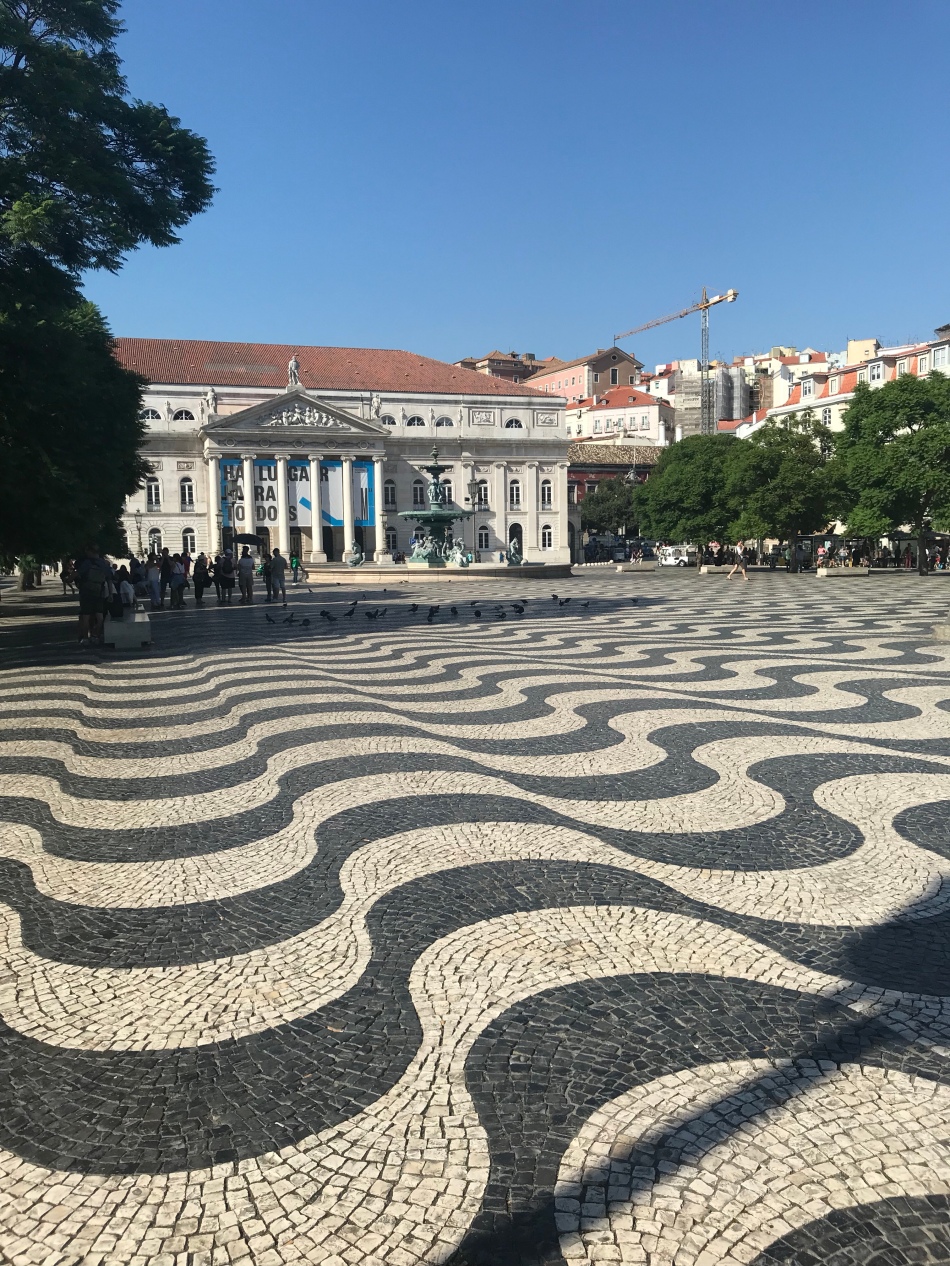 4. The aforementioned Fado Museum for the reasons already discussed.

5. The Museu Militar (military museum) right by San Apolonia train station and overlooked by most tourists it seemed. The World War I exhibit and the wood carved soldiers exhibiting the history of Portuguese military uniforms were highlights.

6. The Pantheon for its beautiful architecture and less crowded way to catch some great views. 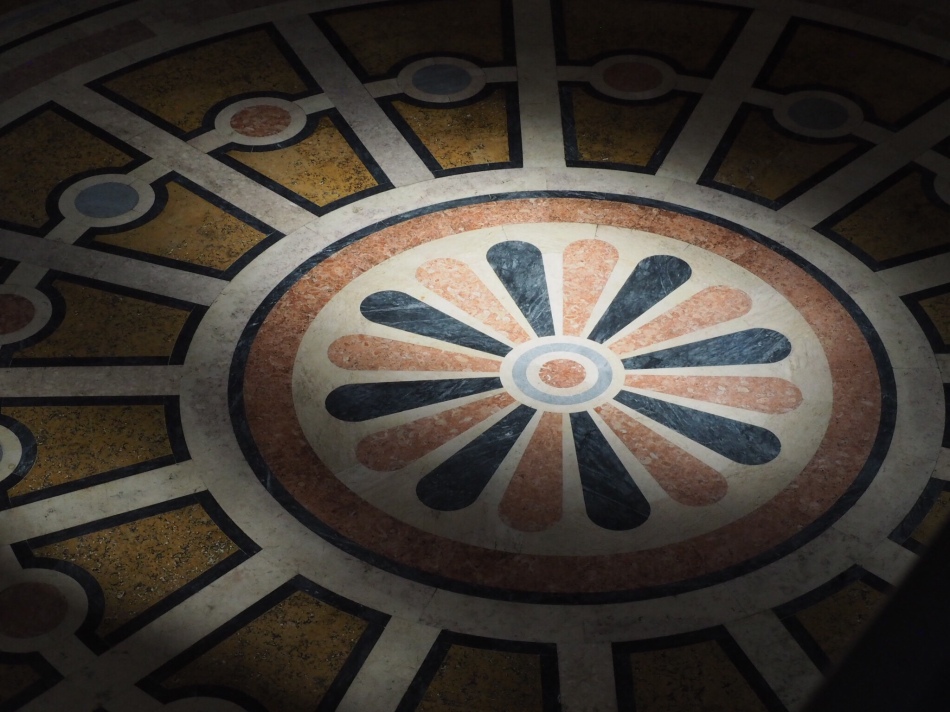 Finally, the food… hard to imagine going wrong. The pastalerias (pastry shops) sell sandwiches, cod fish cakes and Pastéis de Nata (sweet egg based pastry, which refresh after walking the hills and whose calories inspire you for more hill walking). We ate lunches at Le Petit Cafe, Oficina do Duque and The Alfama Cellar and dinners at O Beco (a locals spot, very small, family run, seemingly. It was in our Airbnb host’s recommendations and we loved it and never would have found it otherwise), Leopold (gourmet 10 course dinner with wine pairing menu), Nova Wine Bar (wine shop transformed into tapas style restaurant at night, we just told Miguel, owner and host, to pick dishes and pairings for us). Try the Octopus rice, anything with cod in it, the crispy blood sausage at Nova, oh and get some tinned sardines at Comur or other stores which sell them for your happy hours. 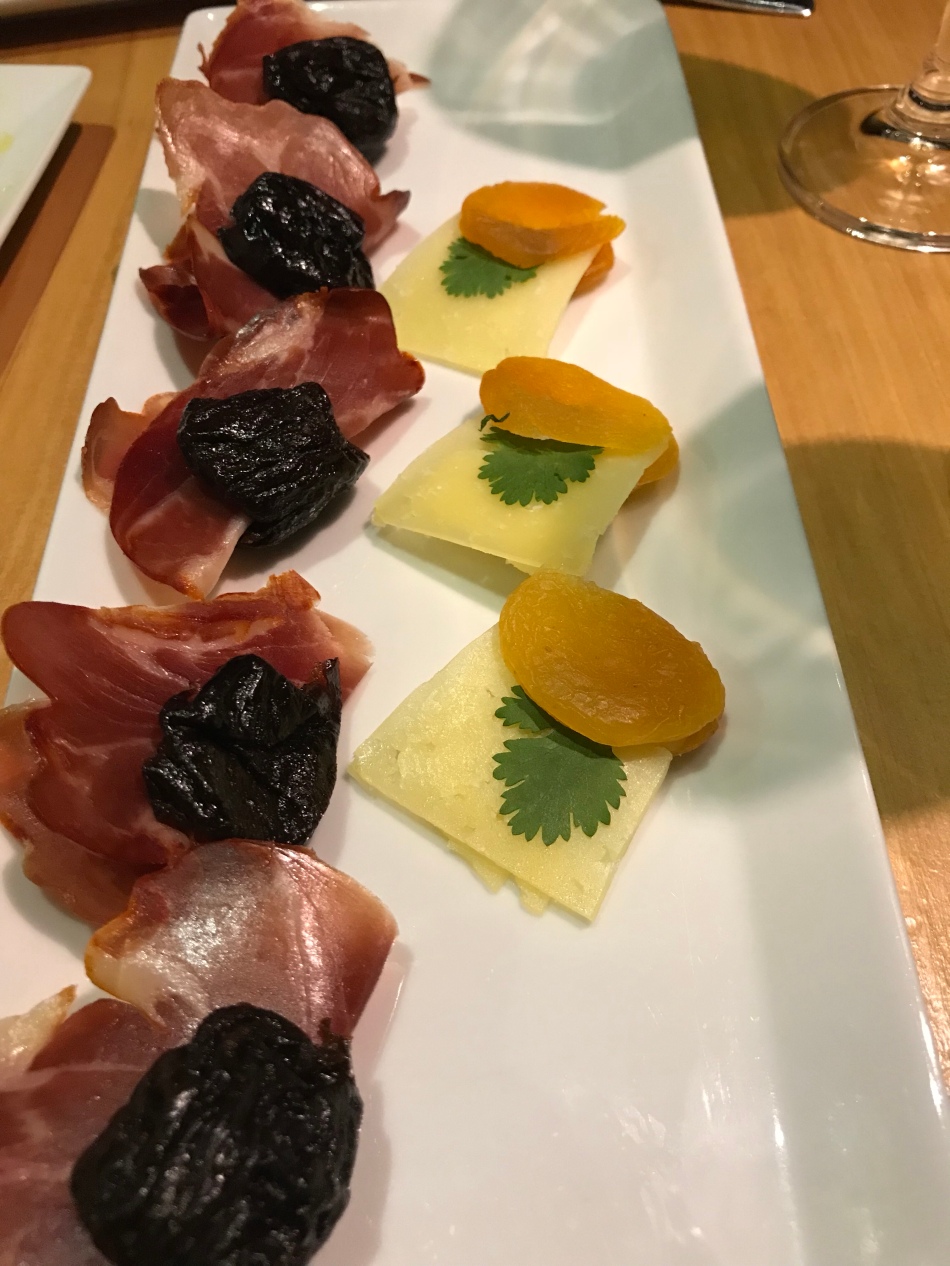 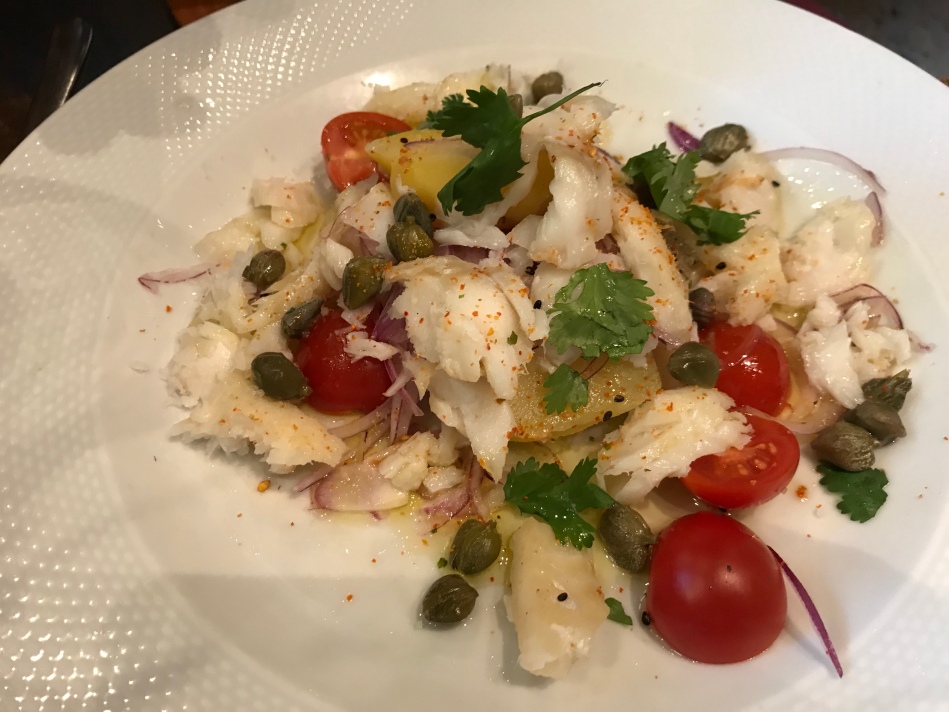 We came in late September and it was still hot, particularly in the mid to late afternoon, so be prepared for heat in the summer. Also, the streets are hilly and, as previously mentioned cobblestoned, so good footwear is a must. I was in a boot with one of my seemingly endless foot afflictions (tendinitis this time, not that it matters) and made it around fine to the amazement of many, but very carefully, so bring good walking shoes. The Tuk Tuks, cable cars and brilliantly placed elevators can help get you around, but this is not a place for the non ambulatory. 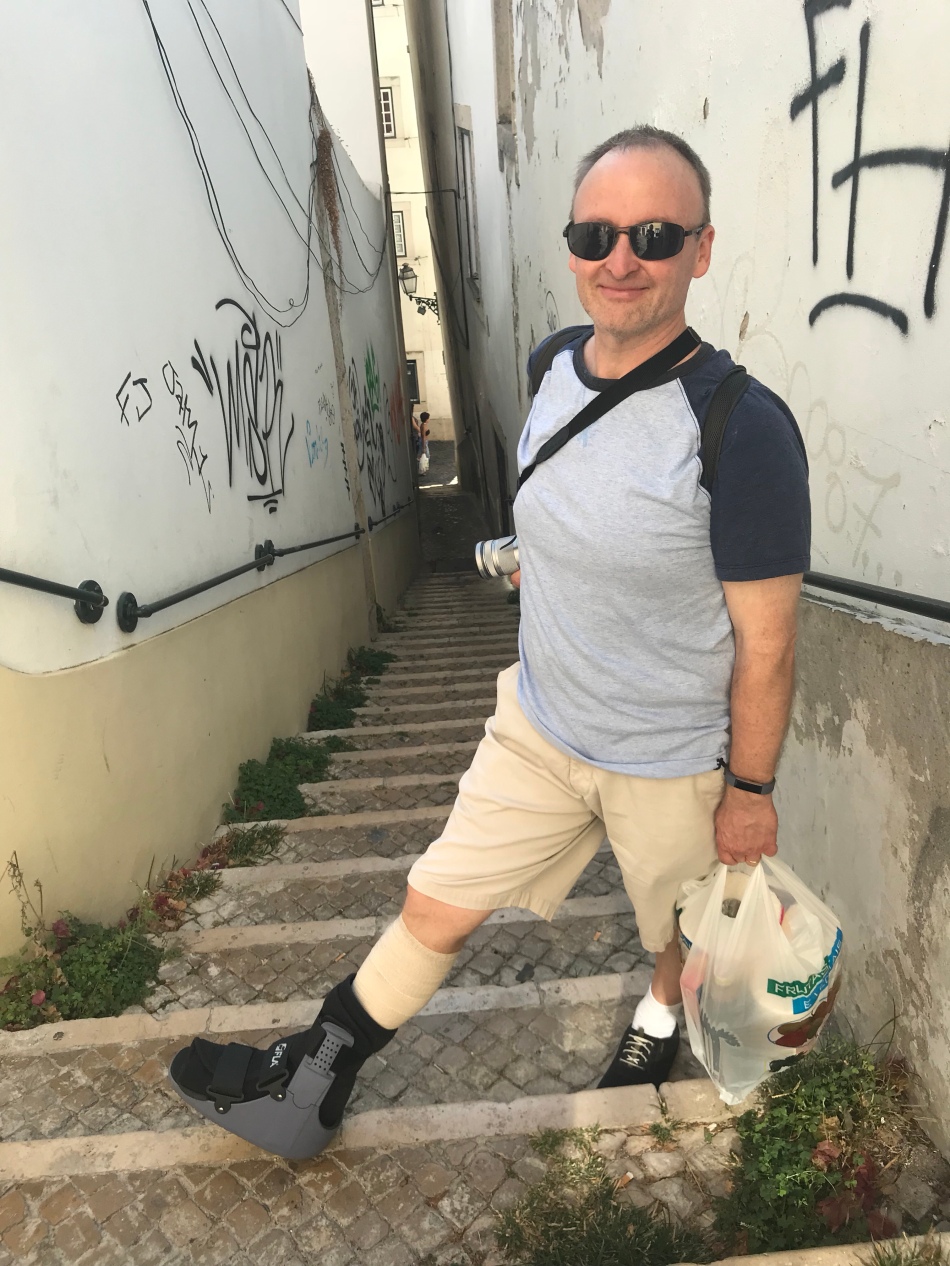 We loved it all and will be back.

0 comments on “Exploring Lisbon, Portugal (aka I wish this place had some hills)”