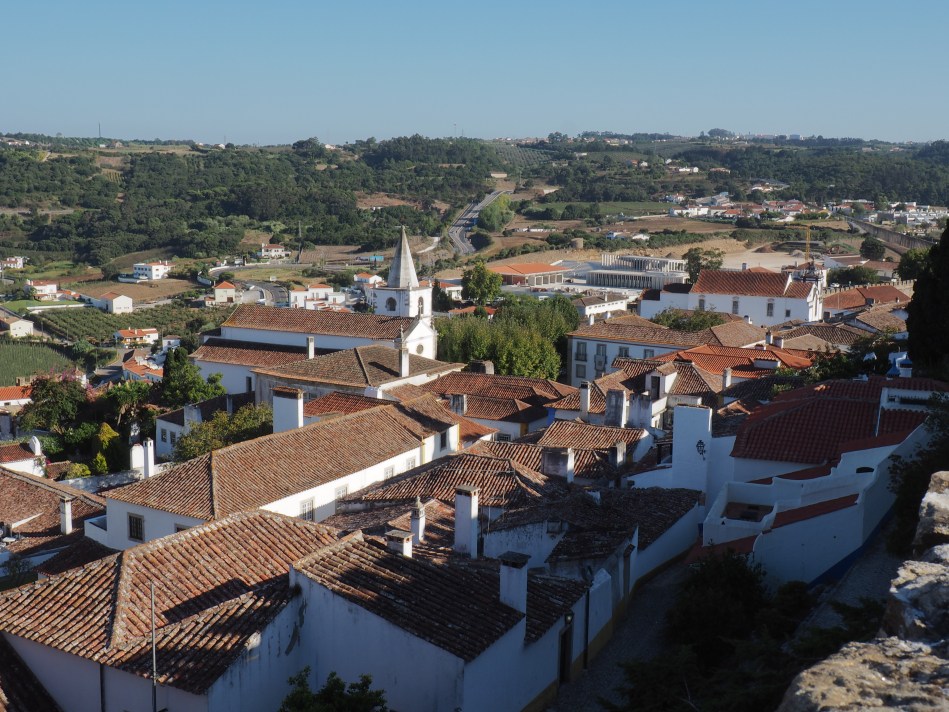 We first came to Óbidos on Christmas Day of 2019. We vowed to return for an overnight after being charmed by this walled city just about two hours north of Lisbon. We had planned to return before leaving for the USA in late January 2020 but couldn’t squeeze it in and then, well, you know… COVID. We have just, finally, returned for an overnight inside the walls.

We began our visit with a stop off to the Lagoa (Lagoon) de Óbidos and Foz do Arelho at the tip of the lagoon where it meets the Atlantic Ocean. There’s a bike trail that runs about 2 miles along the lagoon and ends at the town.

On to Óbidos proper on a warm, humid, early September Saturday. We parked outside the walls in the free dirt parking lot just out of town. We were welcomed through the main gate of the city to the sounds of a bassoon and french horn rendition of Maroon 5’s Memories. Schlepping our bags up the cobblestones and sweating away we arrived at the Casa da Senhora Rainha ready to drop bags and rinse off.

Instead we forged out to explore and shower later. The city is known as the city of the Queens (rainhas) as it was gifted to Queen Uracca by King Afonso II and was fortified and patronized by queens to come. The area was settled dating back to the Celts and was a trading center used by the Phoenicians. Like many hilltop Portuguese towns, the moors inhabited the area, built the original castle and strengthened the town’s defenses until the city was taken back by, allegedly, one Knight (Goncalo Mendes de Maia), during the retaking of Portugal by the Christians. Another fun fact: King Afonso V was married to his cousin Isabella in the Church of Santa Maria here at the ripe old ages of 9 and 10 respectively.

We rambled about town to the castle grounds which are part family photo park (pose with an enormous dragon or in the stocks), part precarious walk along the walls which extend from the castle and around the town, three feet wide with no railing to the inside. Not for the acrophobics. Heading down the main street, Rua Direita, packed with tourists and tour groups, stopping for the occasional Ginja (locally made cherry brandy) in a chocolate cup it’s easy to dip away from the crowds who condense in and pack solely Rua Direita and it’s worth wandering through the back streets and alleys under the walls to find beautiful local homes and tucked away churches.

Our hotel was just beneath the wall and as we sat on our terrace we could hear the wall walkers above as we sipped wine to the sounds of Jack Johnson before heading to dinner at Já Mon Já Mon for tapas and then back to Rua Direita for a final sip of Ginja. A perfect chocolatey finish to a great day between the walls.