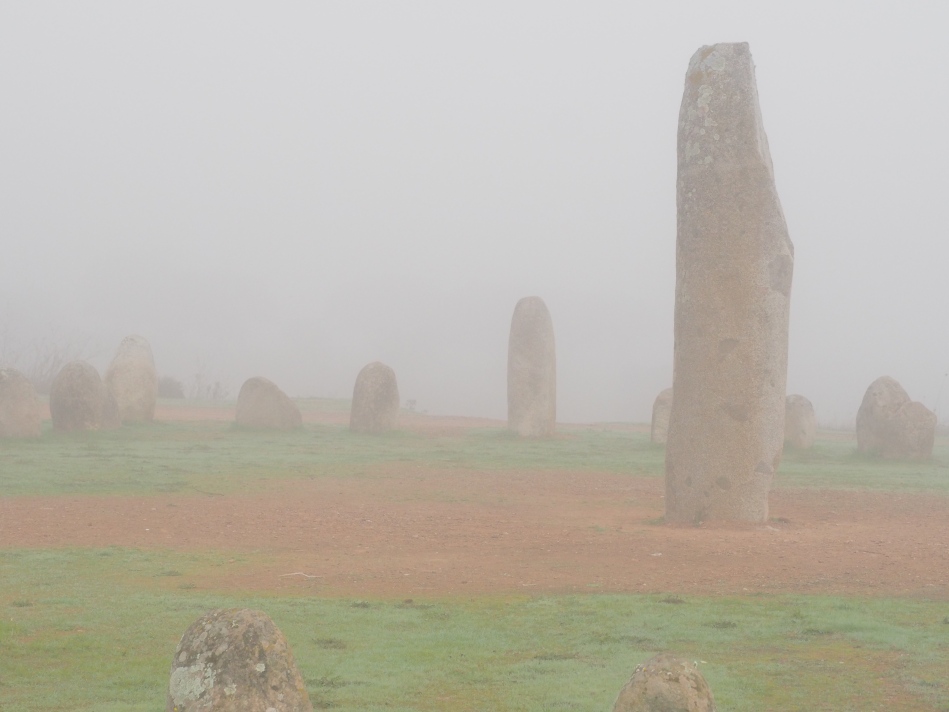 Or perhaps its in the midst of megaliths? You decide.

— “Stonehenge”, from This is Spinal Tap

During our tours of the Alentejo region of Portugal, we visited several megalithic sites across the region.  Several of them can be found near Evora (this site, provides a useful map which we could have used on our first visit where we, despite some actually good road signage, could only locate the Zambujeiro tomb).

The most famous of these Alentejan megaliths is the Cromlech of Almendres.  This site has been dated back to between 4,000 or 5,000 BC making it older than its more famous brother to the north, Stonehenge.  At Almendres, the oval shaped set of stones are believed to have been used to track seasonal changes as the alignment of the stones correspond to the position of the sun during the summer and winter solstices.  Some of the stones have carvings in them like dimples on the top, a shepherd’s crook or semi-circular crescents.

If you go down the road from the Cromlech and pull off to the side and follow a narrow path literally though a cow pasture, there’s a dolman right near it that aligns with the Cromlech at the solstice.

We’d read about Almendres on our first visit to Evora and went off (without a map) just trying to find them and came across the Anta Grande do Zambujeiro.  Its believed that this one was used in some sort of burial or death ritual.

You can take a tour which includes a guide talking about these sites, which we’d recommend (through we didn’t do it, other than eavesdropping) and would do on our next trip to Evora with others.

All of this got us thinking about how so many similar structures can be found across the middle east, Europe and Asia.  So, we hit the Wikipedia (this site is really interesting) to try to learn more.  There isn’t any kind of consensus on if they are all somehow related as people migrated across regions and continents.  In fact, that exact theory has been disputed by archaeologists, but it makes you think: what was it that led people to create these structures?  How did so many end up in similar formations (like the stone circle)?  What was their purpose?  It’s all so fascinating.

You can find similar sites all across the Alentejo region, but these ones near Evora are the most well known.

3 comments on “Megaliths in our Midst”