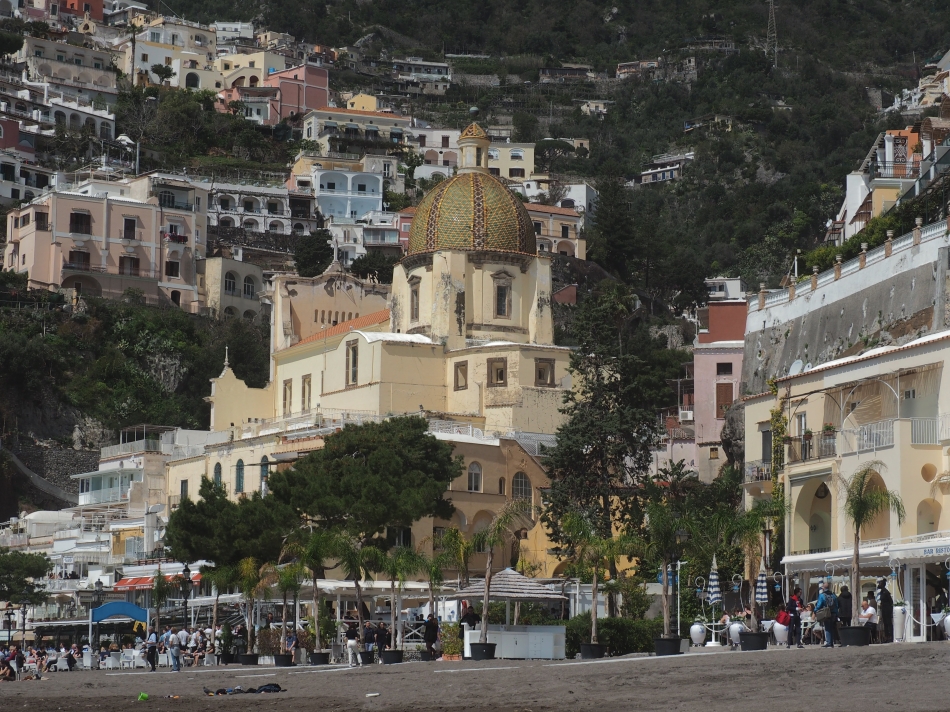 After several weeks of intense Italian cities: the narrow carrugi of Genoa, the energy of Rome and the insanity of Naples, followed by some ferry frenzy and island hopping, we returned to one of my favorite places we’ve ever been: Positano. In the ten years since we’ve visited, if I couldn’t sleep over some work stress or anxiety I would think back to our stay here to calm the nerves and bring on sleep or, at least, relaxation. Our hotel, then, was just steps from the Chiesa di Santa Maria Assunta church on whose steps a man would sit every evening and into the night playing a mandolin (I think mandolin, at least that’s how I remember it) and singing operatic ballads.

As we wound our way down the Amalfi coast and pulled into Positano, we arrived at our apartment greeted by our host and her father who shortly retreated below to their apartment to concoct some lemony vodka welcome aperitifs. Sitting in the mid-afternoon sun we talked about things to do and discussed the nuances of the apartment. We’d planned to hit the town for dinner after some much needed laundry, but the thunderstorms had a different idea, so we hunkered in with a simple dinner (also much needed after many meals out) and some Netflix and rested up for the next day’s ascents and descents on Positano’s many stairways.

Positano is built on the cliffs which descend at steep angles into the sea. Its hard to really describe or capture in images how much the structures are really built on top of each other. The road twists and turns through the town, down into the center and then back up on its way to other Amalfi Coast destinations like a long snake curling past and drifting away from the Positano hills. As a pedestrian, its best to stick to the stairways and back alleys, when you can, to twist and turn, ascend and descend up to the viewpoints, down to the beach and back. When we were here last we stayed right in the heart of the center at Hotel Palazzo Murat. It was a big splurge for us back then but we loved every minute of it. This time, we opted to stay in the neighborhoods above Positano. No operatic arias and mandolins here, rather, our evenings were punctuated with the staccato echoes of the barks of the neighborhood dogs which, initially, fray your nerves a bit but then, like the rest of the neighborhood, you settle in and it becomes part of the charm. And you can’t beat the views.

Underneath the church, you can find a museum of the excavation of a monastery and, below that, the Roman Villa which existed in 100 BC. It’s pretty cool how they’ve excavated it so you can see the current church above you while you stand at the monastery level and then look down on the Roman Villa below. The villa ran from where the Palazzo Murat hotel now sits down to where the beach side restaurants lay. The wall frescoes they’ve uncovered are quite impressive with brilliant colors. Above the Villa, you can see the chairs where they buried the monks and the rich folk. Pricey but if you’re into excavations this might be for you.

There aren’t a lot of sights to see in Positano, save the people (we skipped the Path to the Gods because the logistics seemed more than we felt like dealing with). And this is people watching heaven. Ferries bring in tourists below, to the beach, from Naples and other Amalfi coast towns. Local busses bring them in via the winding Amalfi drive from above. Honeymooners from local hotels drift about on vacation. From above, within and below they converge upon the city center to browse Positano clothing, quaff limoncello, purchase lemon adorned and hand painted pottery, T-shirts and hats, poke through art galleries and to dine at beachfront restaurants like Chez Black with its celebrity lined photo gallery or Le Tre Sorrelle next door. Without an agenda for a few days, by design, we just sat, sipped and soaked in all of the visual stimuli by day and returned to meld back into the neighborhood, with the dogs, by night.

0 comments on “People Watching in Positano”