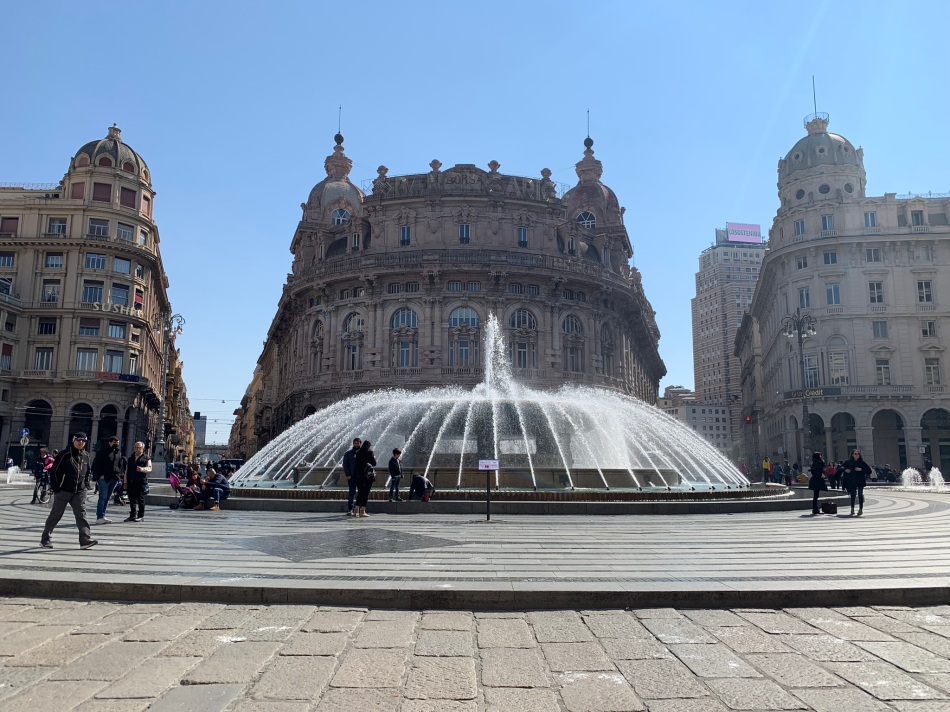 As we crossed over from France into Italy and switched trains just past the border we were treated to a coastal train ride with mountains to the left of us and the Mediterranean and coastline to the right. We cruised along past the first towns of the Italian Riviera, destination: Genoa (or Genova).

As is our custom, after locating our Airbnb in the narrow alleys of the old town, figuring out how to get ourselves in with a combination of codes, key fobs, lockboxes and keys and lugging our stuff up six flights of a beautiful marble staircase, we hit the closest mini market. Since moving to Europe, we’ve grown accustomed to outdoor markets and mini-mercados. Our local market in Cascais, the Meu Super, is one of our favorite little grocery stores anywhere. In France, we grew attached to the Monoprix. Here, we found a Carrefour with the narrowest little shopping aisles that you wouldn’t think carts would be permitted, but you’d be wrong. We navigated the aisles, finding our various items of cibo (food) for the next few days winding our way among the locals doing their Saturday evening shopping with lots of Pregos, Grazies and Scusis to go around. It was fabulous. Back to the Airbnb through the narrow alleyways passing many a real life Paulie Walnuts, we were instantly in love.

Genoa is the sixth largest city in Italy and the capitol of the Luguria region. It transformed from a minor settlement, dating back to the 5th or 4th century BC (making it one of the oldest continuously settled areas in the world) to a more significant maritime port during the First Crusade. In the 19th and 20th centuries the hometown of Christopher Columbus became a major sea and shipbuilding port.

We stayed in the old town, down near the port, with its maze of narrow and winding caruggi (narrow lanes). It was fun to explore and turn into little piazzas or discover a hidden church or cafe in the old town. It is also home to the red light district of Genoa and there are plenty of lurkers, so keep your money, wallets, phones and cameras close and monitor them, particularly after dark. Crossing out of the old town, ascending up hill, you reach the UNESCO site of Via Garibaldi with its many palazzos with beautiful and ornate facades. Further up hill, you can take an elevator or stairways to Spianata di Castelleto for a cappuccino, gelato or just the view of the old town and port below.

We found a great walking tour to explore the city which we’d highly recommend. It took us past all of the major sites starting with the Piazza della Vittoria and its memorial arch to those Genoese lost in World War I, to Genoa’s central square the Piazza de Ferrari with its large fountain and gorgeous surrounding buildings and a great place for people watching.

From Ferrari, we went to the Cattedrale de San Lorenzo in which you can see a bomb that was dropped by the British during World War II but did not explode. On the facade, to the right of one of the main doors, look for the dog sculpted into the side of the building. He is known as the dog of San Lorenzo. While the cathedral was being built a small dog was always nearby keeping the sculptors company. He went missing during the last phase of construction and the sculptors created a small carving of him into the side of the church.

We stopped in Porto Antico at Friggitoria for a Cono Solo Pesce – fried shrimp, calamari and anchovy – not exactly health food, but delicious.

Then, we dove back into the caruggi and headed for the Annunziata church. If you go by, don’t be fooled by the somewhat austere exterior and formal columns. Stop inside for a view of some amazing frescoes, paintings and sculptures on its ceilings and walls. It rivals Saint Peters at the Vatican, in my opinion.

In addition to the port and winding caruggi, Genoa is all about the food. We ate at Le Rune, a charming little place with traditional Genovese food where the owner comes around and greets each table. We let our cameriere decide on our entrees, plates, wine and dessert and were not disappointed. Focaccia is a food the Genovese are proud of and you can get it and pizza nearly every corner you turn. Try a traditional Genovese one with onion. Yum.

We also tried Bella Bu a tapas joint which was packed all weekend every time we walked by. We went there on a Monday night which was slower but that only meant we had the full attention of the waitstaff. Great food, great wine. Two thumbs up.

And in keeping with the theme of just how many steps will I need to take each day to keep from having to adjust that belt buckle a little looser, we took an Airbnb experience cooking class. At the home of Daniela, we made pasta and tiramisu. We made a pansotti with red sauce and a homemade thin angel hair-like pasta, called tagliolini, with pesto sauce. All from scratch.

To work some of the pasta off the waistline, we finished our visit with a stroll along the ocean to the Boccadasse neighborhood where we were the only two people not enjoying a gelato (too full after two courses of pasta and tiramisu) as the sun started to dip into the Mediterranean.

1 comment on “You Say Genoa, I Say Genova; our first stop in Liguria”